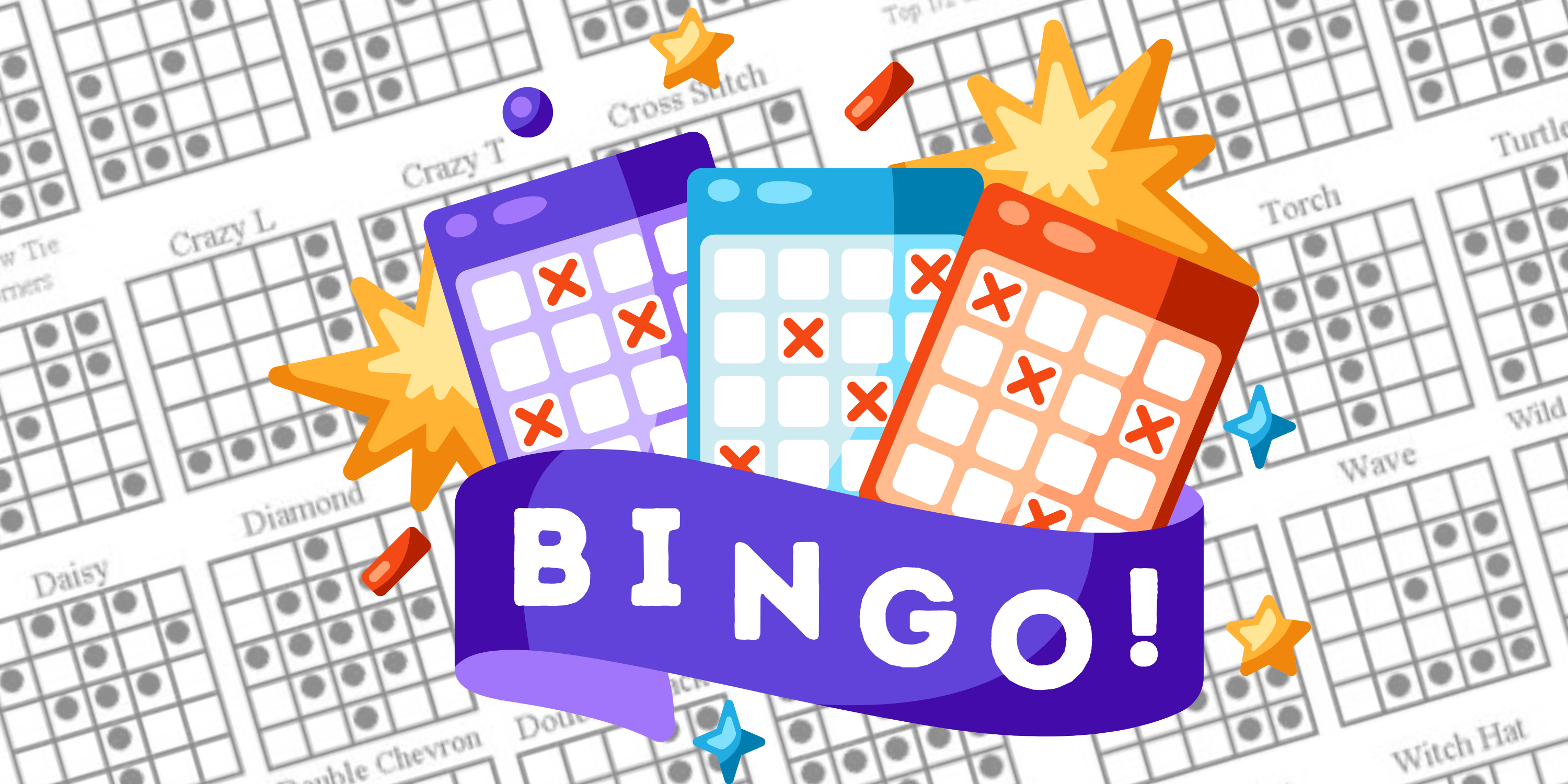 Winning in bingo is all about drawing the right lines and patterns by marking off the numbers on the cards as they are being called. Shouting “Bingo!” is what every player wants, after all.

The different bingo combinations that players win with depend on the bingo variant they are playing. The main types of bingo are the 90-ball British bingo and the 75-ball American bingo. However, there are other variants such as the 60-ball and the 80-ball bingo out there too. Check the game’s rules to understand what patterns trigger wins, and which ones do not.

Let us first look into the most popular and most common winning line patterns in bingo.

A single line pattern is the most common line combination in bingo and can translate into a horizontal, vertical, or diagonal straight line. It is a basic line that can get the player certain prizes or money, as underlined in the game rules. Drawing a single line implies marking off all the numbers that come in a straight line on the bingo card.

Single line patterns are applicable for both US and UK bingo. In UK bingo, the line has to be on the very same card. Getting a single-line pattern is easy and often, happens rather quickly for the bingo player.

The next most common bingo line pattern is a double line, or more generally, multiple lines. It is when the player is able to strike off all the numbers appearing on two consecutive lines. Drawing a double line is easier for the UK bingo because of how the numbers are placed in the rows and columns on the card. A double line pattern implies completing two lines, which can appear one after the other or just be two differently placed lines anywhere on the card. The probability of getting a double line in bingo is 1 in the 88th call though the odds depend largely on how many cards or tickets you are playing with.

The numbers appearing diagonally on a bingo card make up for a diagonal winning pattern in bingo. However, diagonal patterns can neither be drawn nor considered for winning in UK bingo, which has 3 rows and 9 columns with 15 numbers spread across 27 spaces. Diagonal patterns are accepted and also, a bit common in the US 75-ball bingo. Players can win prizes and money by striking off the numbers appearing diagonally on the bingo cards.

Apart from the line patterns, there are the bingo cover patterns that heighten the interest quotient of the game.

The frames can also be covered in bingo in the following ways:

Frame patterns are common in US bingo because of the way the numbers are placed. Covering the inner frame can be quite fast, at times. It implies marking off all the numbers that are placed on the two vertical lines and the two horizontal lines just inside the outer frame of the bingo card. An inner frame, as a winning pattern, appears in the shape of a square.

The outer frame also implies marking off all the numbers on the two horizontal and two vertical lines on the US bingo card, thereby, forming the shape of a square. The outer frame, as the name suggests, refers to the numbers spread in the outermost frame of the card. As bingo is a game of chance to a large extent, players often get lucky to win the very first prize, in a series of prizes, by covering the outer frame.

Four corners is an easy and quick winning pattern in bingo, offering higher odds for the player. Striking this four corner pattern requires the player to just mark off all the 4 numbers appearing on the 4 sides of the bingo card, forming a square but just with the corners. The four corner pattern is applicable for the US 75-ball bingo along with some other variants but is not possible in UK 90-ball bingo.

The cloverleaf is an interesting, but quite difficult to create, winning pattern in bingo. Again applicable for the US bingo only, this pattern can be drawn by covering four numbers in the shape of a square in all four corners of the bingo card. This means that the player has to mark off a total of 16 numbers on the card. The middle spaces of the card, appearing as a cross sign, remains unmarked and empty.

Here are some of the questions about winning patterns in bingo answered in brief.

How many bingo patterns are there?

While there are about 15-20 common bingo patterns including the line, cover, and shape patterns, there can actually be numerous patterns that can be drawn by bingo players and are allowed in a game. The patterns that you can draw depend largely on the bingo variant, which further determines the number of card rows and columns.

Is a diagonal line a winning pattern in bingo?

A diagonal line is a winning pattern in the 75-ball bingo, commonly played in the US but a diagonal line cannot be drawn on a 90-ball British bingo card.

Are letters and numbers winning patterns in bingo?

Letters and numbers can be winning patterns in US bingo and a few other variants. It depends on the rule of the game. Striking the alphabet ‘P’ or the number ‘7’ are common in the bingo variants. However, the probability of getting these patterns is less.

What are the winning patterns in British bingo?

In British bingo, there are just three winning patterns for players to draw. These are single line, double lines, and full house.

Is a full house the same as a coverall in bingo?

Full house and coverall are basically the same in the sense that both require the player to cover or mark off all the numbers on the bingo ticket or card. The term ‘full house’ applies more for UK bingo where completing all the three lines implies a full house and hitting jackpot. Coverall also means covering all the numbers on the card and is usually, referred to with respect to the American bingo.

Is there an official list of winning bingo patterns?

Though there are several winning bingo patterns, there is no such official list for the same.