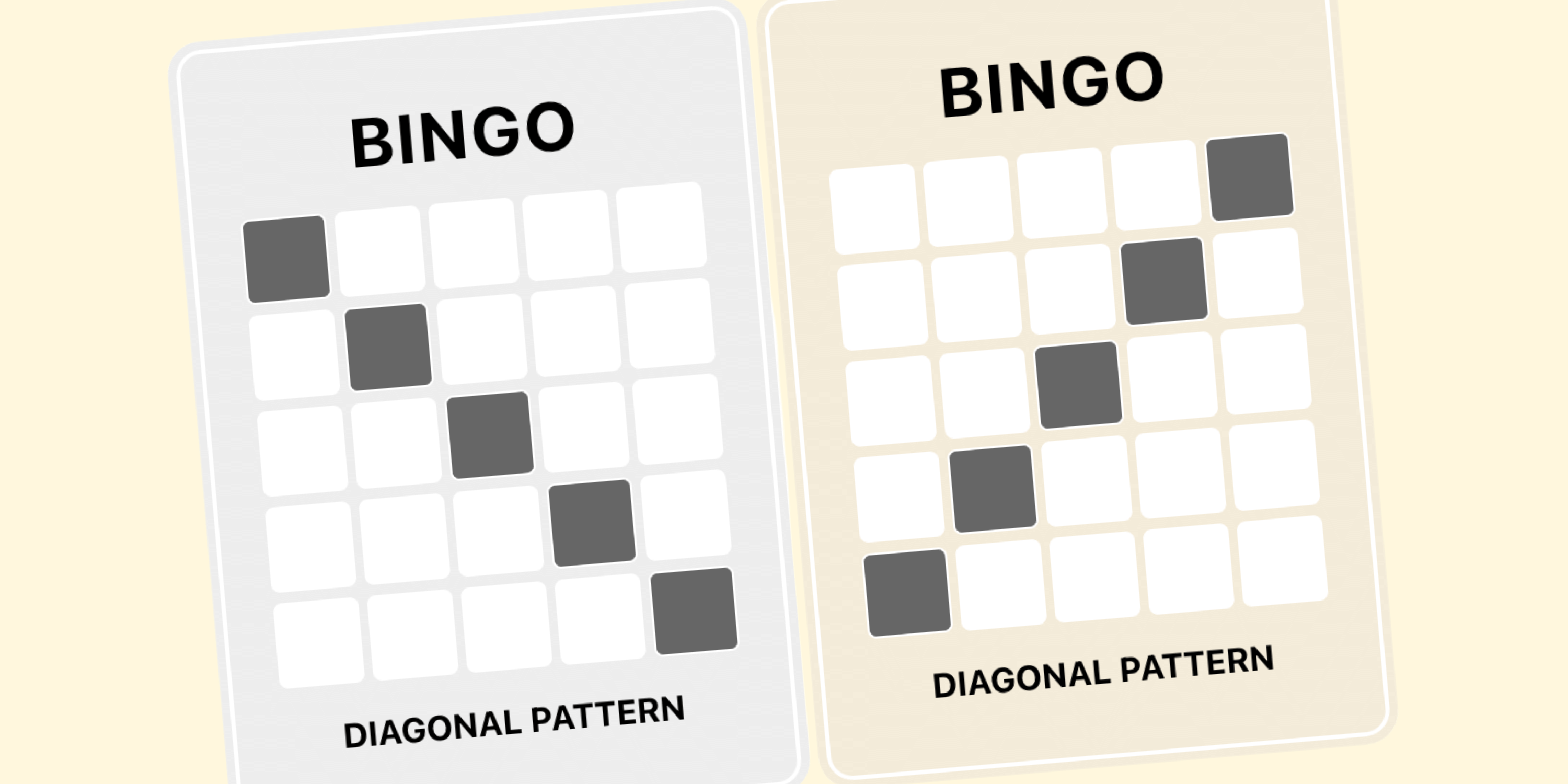 Line patterns are very common and popular in the games of bingo and much like the single line and two-line patterns, the bingo diagonal line pattern is quite sought after by players.

Make sure you check out the even more popular horizontal and vertical lines.

What Is a Diagonal Pattern In Bingo

A diagonal bingo pattern is very simple in the sense that this pattern is just a diagonal line appearing across the bingo card.

In games like the 75-ball US bingo or the 80-ball bingo, diagonal patterns are popular. As it involves marking off fewer numbers, players try to complete a diagonal line pattern, win considerable prizes/money for the same and then, aim at other patterns or coverall.

A diagonal line can neither be drawn properly nor considered a winning pattern in the 90-ball British bingo variant, in which the bingo ticket has 3 rows and 9 columns and just 15 numbers all over the card.

There are only some online bingo variations that allow diagonal lines to win, such as these:

In American bingo, diagonal lines are considered winning patterns. The rule is that the player must be able to strike off all the numbers from the rightmost/leftmost corner at the top of the card to the leftmost/rightmost corner at the bottom of the card. So, basically, there are two ways of completing the diagonal line in American bingo. The payouts are usually similar to the payouts for completing single lines and vary depending on the specific rules and allotted prizes in that particular session of bingo.

The 80-ball bingo is another popular variant of bingo that allows diagonal line patterns. The 80-ball bingo variant is very similar to the 75-ball American bingo. In the 80-ball bingo, the square-shaped bingo card is divided into 4 rows and 4 columns. The rule for drawing the diagonal line is pretty simple. A player just needs to mark off the numbers from either the leftmost top corner to the rightmost bottom corner or the rightmost top corner to the leftmost bottom corner of the bingo card.

Diagonal lines do not count in the British bingo. As per the 90-ball UK bingo rules, a player cannot draw diagonal lines and expect to win prizes. Also, with the bingo ticket comprising 3 rows and 9 columns with just 15 numbers spread across it, drawing a diagonal line is not even possible.

Here are some of the most frequently asked questions about diagonal line patterns in bingo, answered in brief:

What does a diagonal pattern look like in bingo?

Yes, diagonal lines are considered winning patterns in American bingo. Diagonal lines must cover the two numbers placed on the two corners at the left and right sides on the top and bottom of the card and the three numbers in between, appearing diagonally.

Does the free space count in a diagonal bingo line?

Yes, the free spaces are also counted in a diagonal bingo line in the American bingo. The player, who is able to complete a diagonal line with a free space in between is at an advantage as he has to mark off four numbers instead of five.

The diagonal line pattern is a popular one, aimed at by players in a game of US bingo, 5-Line bingo, or the lesser-known 80-ball bingo.