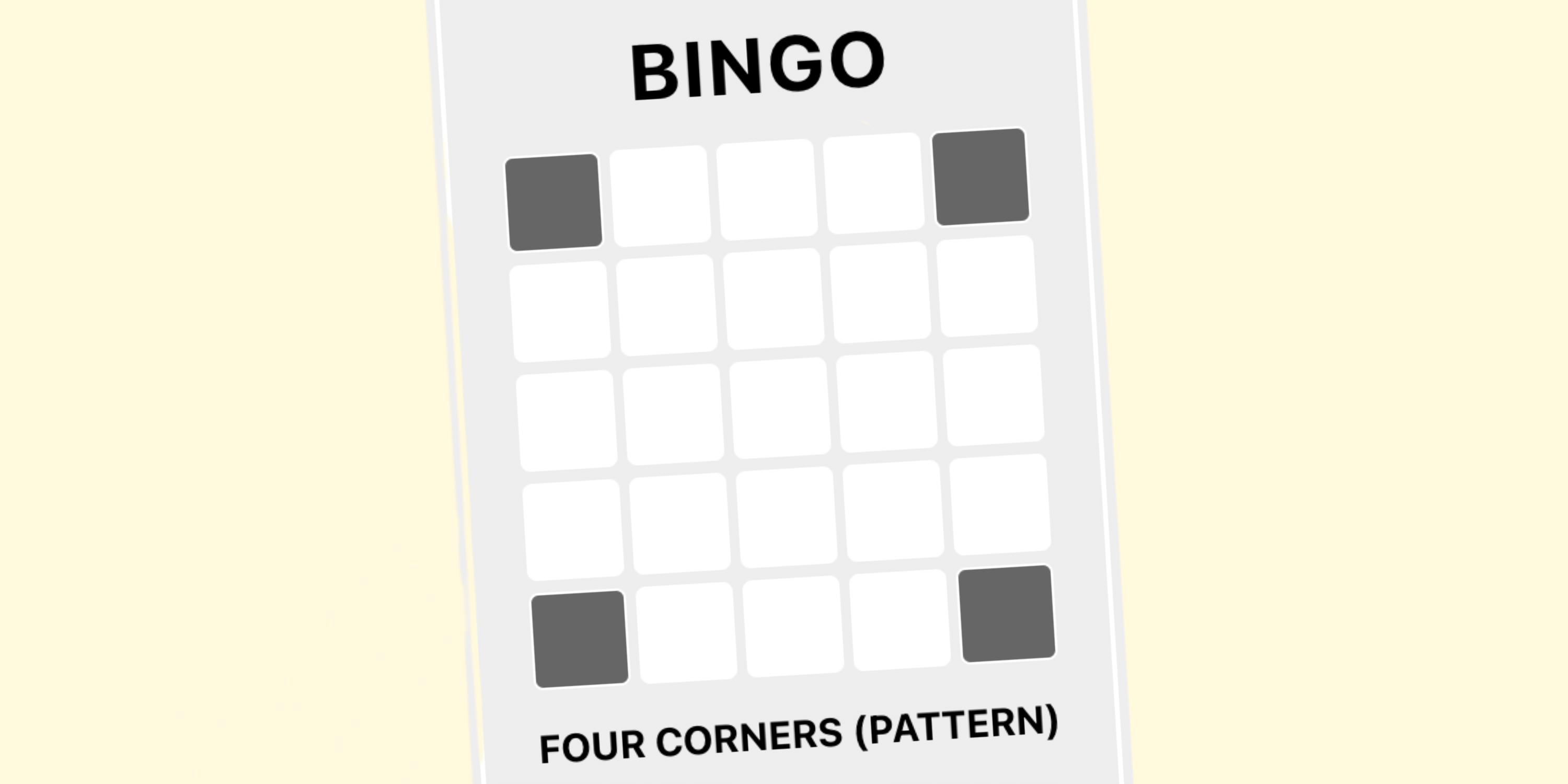 The game of bingo is all about creating combinations and patterns to win prizes. These patterns can be ranging from simple lines to complicated shapes like cloverleaf and diamond. Four corners is also a very common and very popular winning pattern in bingo and players aim at getting this pattern, which is easier and faster to draw than many other patterns.

Four corners in bingo mean covering the four corners of the bingo card.

While drawing a four corner is not impossible in UK bingo, this pattern is often not included in a session of the 90-ball bingo game. In the 75-ball US bingo variant, however, four corner pattern is quite sought after. As the bingo card is a square-shaped one with 25 boxes all over the card, covering four corners implies striking off the two numbers on the two sides of the topmost row and the two numbers on the sides of the bottom row. This basically means marking off the leftmost and rightmost numbers on the top and bottom lines of the card, as the numbers are being announced. Drawing a four corner is possible in most bingo variants.

The payouts in bingo for a particular game vary depending on the number of players, the specific rules set for the game, the game variant and so on. While four corners do not lead to a jackpot, the payout is quite substantial or one-fourth of the jackpot amount. For example, if a coverall gets the player a jackpot of $100, completing four corners should bring him a prize of $25.

Bingo is a pretty much simple and straightforward game and the rules for completing most lines and patterns are simple too. The basic rule of getting the four corners in bingo is that players will have to mark 4 numbers of the card and these numbers should be the ones on the leftmost and rightmost corner of the top and the bottom of the card. Basically, in US bingo, the upper and lower corner numbers of the B and O columns are marked and the I, N and G columns are ignored.

Unlike line patterns, which can vary in terms of being vertical, horizontal etc, four corner patterns can be drawn in a single way and that is by marking the 2 corners on the top and 2 corners at the bottom of the card. In a US bingo card, the 4 corners of the same will be blocked as shown in the example below:

Here are the common questions about the Four Corners pattern answered in brief:

What do four corners mean in bingo?

“Four corners” in bingo means a winning pattern that is achieved by marking off 4 numbers on the card, appearing on the leftmost and rightmost corners of the topmost and bottom-most line of the card.

Can you get Four Corners in British bingo?

Getting a “four corner” in British bingo is not impossible as the corner numbers can be marked. However, four corners pattern is more popular in the US bingo variant.

How much does a Four Corners pattern payout?

The four corners pattern payout varies depending on the particular rules for that specific session of the game and the number of players. Usually, it is 1/4th of the jackpot or coverall amount, or 25% of the prize pool.

Do four corners pay more than single lines in bingo?

Yes, four corners is a winning pattern and it often pays more than single lines in bingo.

What are the odds of getting four corners in four numbers?

Thus, the four corner pattern is an interesting one, and because it involves covering just 4 numbers on the bingo card, it happens quite fast for many players.